In order to understand the history of the exhaust on the Cessna 18X Series of aircraft lets roll back the clock to where it all began. The O-470 appeared in the Cessna L-19 Bird Dog which was itself developed from the Cessna C-170 Aircraft. Elements of the C-170 Appear in the Bird Dog in the engine mount, the dual Exhaust configuration, and general layout of the aircraft. When Cessna Developed the 180 Aircraft, design elements from the L-19 including the exhaust and engine mount were used. 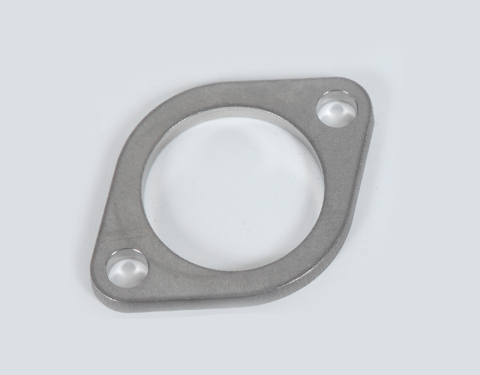 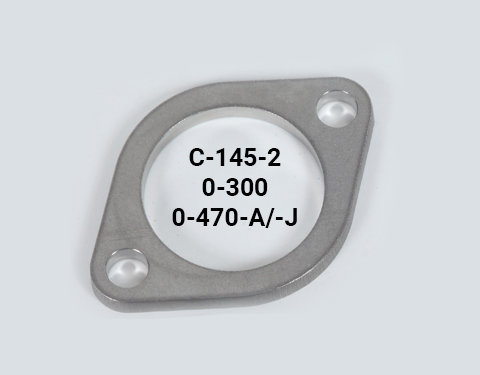 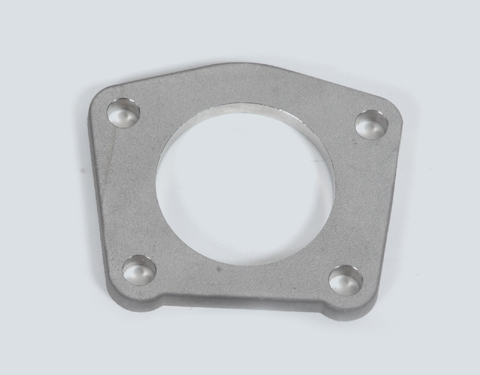 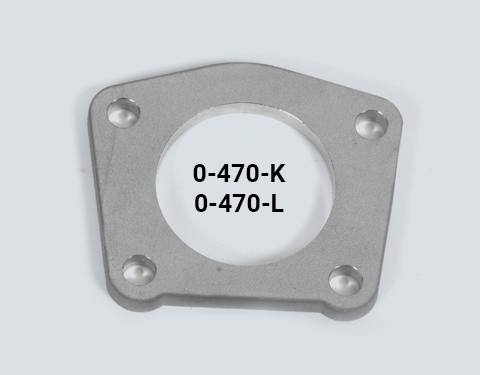 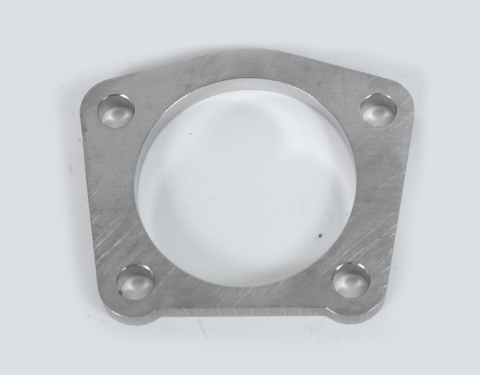 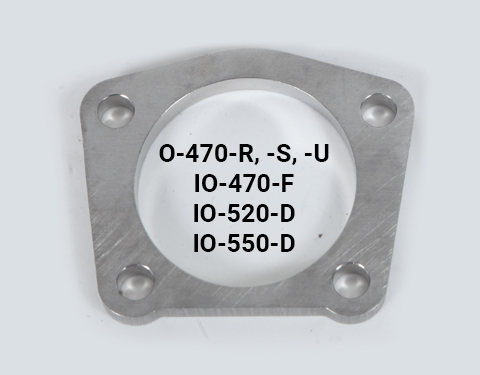 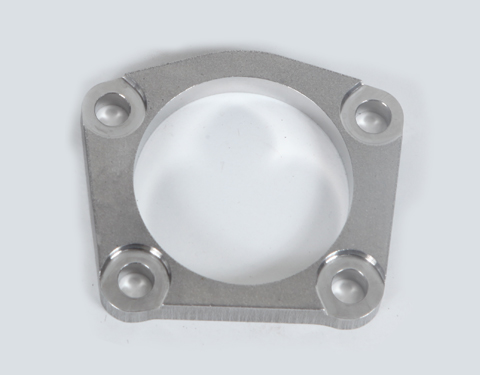 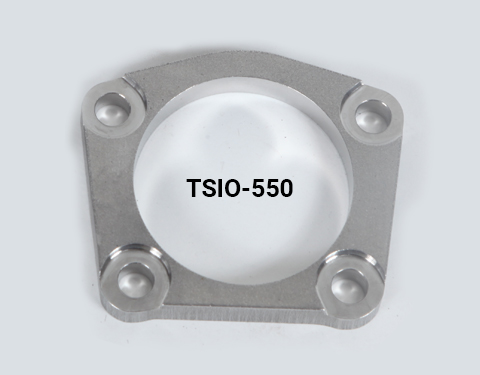 The Cessna 170 with the C145-2/O-300-A engine developed 145HP at 2700RPM from a engine with 301 inch³ displacement using 7:1 compression cylinders. When you crunch the numbers this little engine pushed out 3.9192 ft³ of exhaust every second out the 6 exhaust ports having a area of 9.63 inch². The L-19 with is O-470-11 Continental engine delivered 190HP at 2300RPM from a engine with 471 inch³ displacement. This engine put out 133% the exhaust that the C145-2/O-300-A out through the exact same sized cylinder flanges, riser pipes, exhaust mufflers, and tailpipes. By the time the O-470-A was installed in the Cessna 180, 151% of the exhaust that the original flanges had going through them started creating problems with the flanges deteriorating and warping. The solution was to use a 4-bolt flange starting with the O-470-K.

At this point the volume of exhaust per area of exhaust was 1.5 Times what it was on the C145-2/O-300-A and as airframe refinements were made the exhaust evolved from a dual exhaust, into a single exhaust traversing the engine. These cones were required to distribute the exhaust evenly into the muffler and increase the availability of Cabin and Carburetor heat. Prior to this, an exhaust diffuser was used inside the muffler combined with studs inside and out to attempt to maximize the heat transfer in the small muffler package. The single muffler did not do anything to improve the flow of the exhaust but did reduce weight, while maintaining the same heat available for Cabin and Carburetor heat.

As aerodynamic and performance refinements continued to be made the exhaust was modified. First the exhaust tailpipe was moved from the Pilot side to the Co-Pilot side. This was done for 2 reasons 1) CO entering the fuselage was always a problem. This change positioned the exhaust on the side of the aircraft where the propwash would push it away from the aircraft. 2)The re-located tailpipe could keep the aircraft fuselage cleaner. Customers wishing to perform this switch can incorporate the mod while performing SK182-9 and SK182-15.

Another performance refinement involved reducing the amount of dust that entered the engine and aircraft. In February 1958 anti-dust kits (Ref SK180-13 and SK182-10) were made available to operators. These kits relocated the air intakes to just under the propeller to reduce the amount of dust captured by the filter. Since the heated Carburetor air was not filtered, the LH inlet in the cowling was simply capped off and intermediate tube between the shroud and cowl removed. This modification addressed investigations that were communicated in December 1956 about contamination of engines with dirt and dust. This improvement was introduced at as a service kit and then incorporated on aircraft 18050356 and 18251557 for the 1959 Model year. On 1959 aircraft the Cabin Heat attaches to the Baffling under the Oil Cooler and the Carburetor heat attaches to the Pilot side aft baffle.

A major change to the exhaust system was introduced in 1962 by eliminating the Carb heat from the mufflers. This modification was incorporated on 1963 aircraft and available as a retrofit kit for the older aircraft. The muffler was modified to join both the cabin and carb heat chambers together and the exit port to the airbox was welded shut. The carb heat was now supplied by a shroud supplied by the LH exhaust collector. This modification had several key benefits, 1) It supplied additional cabin heat to the aircraft as both sides of the muffler were now being used to supply heat 2) It supplied a constant and consistent source of carb heat that did not adversely affect engine performance when carb heat was switched on 3) It supplied a source of heated air to the carburetor that was no longer pressurized during flight. This allowed cooler air to enter the carburetor during normal flight as the heated air would no longer creep around the valve in the airbox. Aircrafts equipped with Anti-Dust Kits SK180-13 and SK182-10 already solved this problem.

Cessna continued to make aerodynamic and performance improvements its aircraft however none of them ever address the problem that came up when the O-470-K motor was pumping 151% of the exhaust that the exhaust was initially designed for. When the fuel injected IO-470-F motor was introduced in 1961 for the Cessna 185 a new exhaust stack was designed that increased the exhaust area by 133% drastically improving the exhaust flow. These new formed collectors were designed to help the exhaust get drawn away from the engine. The 180 received this update at serial number 18051312 while the 182 did not get it until a few years later at serial 18255059.

Over time this new exhaust designed was modified and adapted by changing the thickness, overall height, removing mounting tabs for the Carb Heat shrouds, adding doublers, and lastly adding a slip jointed center flange. There are a few elements that remained constant that many people have never noticed:

Starting in 1996, Acorn Welding Ltd. started developing a better, universal muffler for the Cessna C-180, 182, and 185 Aircraft. This was driven by demand from customers wanting to get a longer, float style, muffler on their aircraft. While evaluating this demand, we quickly realized that the main can of the muffler simply could not support a tailpipe that was longer than what Cessna had designed. This was validated with numerous cracked mufflers and several incidents of the tailpipes simply falling off completely from aircraft on both original and aftermarket mufflers. This required Acorn to develop a clean sheet heat exchanger and tailpipe joint that did not require any additional bracing, gusseting or use of doublers. Full stress testing with strain gages was used to validate the new design. This new extended muffler was finally certified in Spring of 1997 as Canadian SA97-33, with FAA validation in January 1998 as SA00780NY.

At this point there was a good solid exhaust installed on the later model aircraft… One problem remained, with all the exhaust improvements over the years it was unclear how to update and upgrade the exhaust on the earlier aircraft. In 2011, Acorn Welding updated the STC to include the oldest Cessna 180 and 182 aircraft. This upgrade increased the area in the collectors by 133% and is available without a muffler baffle. The entire exhaust must be changed and updated to receive these benefits.

Ok… so what effect does this have on the exhaust? Well for arguments sake, lets assume the numbers are run only at Maximum RPM of the engine… as in Takeoff Power. On the older 180’s and 182’s using the 1.5” diameter original exhaust, the exhaust velocity is approximately 26.9m/s. When the Acorn Welding STC exhaust kit is used to update this exhaust the exhaust velocity will drops to approximately 20.1m/s. Now think about updating the engine to an IO-520-D and NOT updating the exhaust. The resulting velocity increases to 32.55m/s. Ultimately the engine STC holder clarifies if a exhaust change is required but it is highly recommended.

From all that velocity you get Noise, back pressure and increased engine temperatures. So where do we go from here? Some say to tune the exhaust, some say equal length pipes. At the end of the day, you can forget everything we just discussed and look at the shear fact that you are putting a flange with a 1.5” Diameter hole over a port that, in most cases, has a diameter of 1.75”. Keeping the old exhaust that had major changes to it around is not doing anyone any favors. Besides, It is not possible to use the old exhaust with our Seaplanes West Engine mounts.